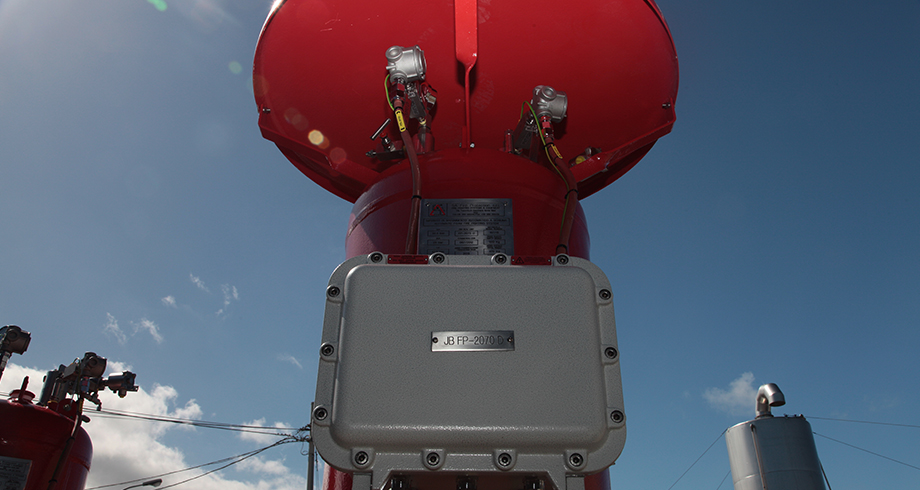 Rim Seal floating roof tank fires represent one of the most dangerous threats for chemical and petrochemical storage farms. Industry data base shows that the oil industry has experienced several rim seal fires worldwide and some of them have developed into very large disasters. The causes of such disasters start with a rim seal fire that breaks out and grows undetected to a point that it spreads over the whole seal area and therefore the floating roof tank becomes surrounded by fire. In the worst case scenario, the intense heat radiated is absorbed partially by the tank shell and the pontoon until the point that the metal sheets lose their mechanical stability. In such conditions the roof is no longer capable to float normally and can incline causing the roof to sink under the fuel with a consequential full surface fire. The most efficient way to avoid such fires to develop uncontrolled is that of installing a fire detection and suppression system. Such systems specified by NFPA 11 provides well proven methods of firefighting on floating roof tanks. However, such systems have a reaction time from fire detection to suppression that still leaves many oil companies concerned about the fire suppression performance.

It is in fact paramount that a fire on a floating roof tank is to be suppressed as soon as possible. In this respect an additional system is supplied and integrated with the tank floating roof in order to provide early fire detection and instantaneous fire suppression within the rim seal zone. Such packages are capable of detecting instantaneously the fire outbreak in the rim seal zone and discharge in seconds a charge of fire extinguishing agent directly on the zone where the incipient fire has developed. This strategy have been proven successful when the rim seal packages are interconnected with the main foam system that is automatically activated seconds after the rim seal unit has discharged. For such reasons the units are instrumented with low and high pressure switches that monitors the status of the unit as well as its activation. Those instruments are connected to the main control system or F&G that manage the system logics and triggers the traditional foam system.

Rim seal unit on a floating roof tank SA Fire Protection is an OEM of rim seal fire detection & suppression solutions for the protection of floating roof tanks. The solutions available are several and each one is designed to cope with a specific tank seal design, fuel content and environmental condition.

The Rim Seal Fire Suppression Systems are available based on the following extinguishing agents:

1. Foam Based units can be configured with the following operational methods:

Activation of the unit is via a propellant gas (nitrogen) which can be:

Foam Concentrate is available for the unit as per:

2. Gas Based units can be configured with the following operational methods:

Gas extinguishing medium available for the unit are:

Discharge Nozzle are closed head (discharge takes place only from those activated.)

Actuation of foam based rim seal units can be:

Automatic or Single Zone
Automatic actuation takes place via a pneumatic or an electric trim. When pneumatic only one unit will discharge where fire is detected. If fire spreads laterally other units will actuate accordingly. Remote actuation is possible installing a pilot SOV on each unit.

Automatic & Remote Manual Multiple Zones
Automatic Multiple Zone actuation is possible only for foam based rim seal units and it is achieved using a unique pneumatic fire detection tubing interconnected to each unit. Independently from fire location all units will discharge simultaneously. Remote actuation is achieved installing one or more SOV.

Remote electric actuation is used when the units are to be activated from control room because used for vapor seal purpose.

With some foam based rim seal units it is in fact possible to integrate their action for vapor containments aimed at protecting the floating roof tanks from being involved in a domino effect. In such cases, should a tank be involved in an uncontrolled full surface fire, the fire protection strategy calls for spraying the nearby tanks in order to cool the metal surface and prevent mechanical failure of the shell. The heat radiated though can be such that the fuel content inside the nearby tank heats up to a point that vapors are likely to be released from the seal. Such a mixture creates a flammable atmosphere above the tanks that can ignite under the radiated heat and cause the fire to spread known as the domino effect.

The foam based rim seal units can be so designed to enter into the fire protection strategy of vapor containments creating an additional chemical seal on the radiated tanks in order to block the fuel vapors to exit the seal zone.

With such configuration it is possible to call the tank units into operation from the control room on each tank that is identified as being at risk. This additional measure of protection safeguard the tank from being involved into a domino effect increasing significantly the degree of safety of the whole tank farm.

Interfaces with control systems
The interface with the control system or F&G main panel allows for monitoring the unit status in stand by condition and can be arranged according to different architectures depending on the degree of monitoring that wants to be achieved.

Cumulative Zoning
Allow for monitoring of the units as a group can be achieved via hardwired interconnection.

Monitoring
Control Panels can be connected to third party DCS or dedicated monitoring station (SCADA). Graphic maps will be displayed on the monitor screen indicating the status of all rim seal units.

For more information on our packages contact the team